A Murder Is Forever[1] is the eighth episode of the sixth season of Castle.

When a famed relationship therapist is murdered, it appears that her access to the secrets of her elite and powerful clients led to her death. But when Castle and Beckett discover the victim was in possession of a rare object worth millions of dollars, they realize that this case may be even more complicated – and dangerous – than they thought. 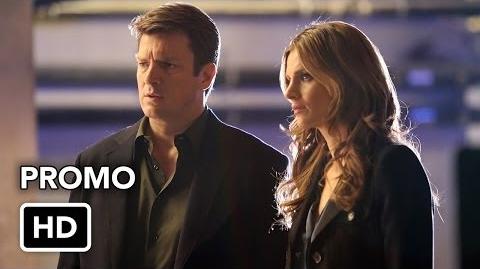 Esposito: You really buy that?
Ryan: Uh, yeah. Skimmed through her book. I think there might be something to her theory. For instance, she said that in every relationship, there's needs to be masculine energy and feminine energy, even in ours.
Esposito: Oh. Well, we know which one you're are.
Ryan: I don't know about you, but I'm very comfortable in my masculinity.
Esposito: You do realize you're wearing a sweater vest, right?

Retrieved from "https://castle.fandom.com/wiki/A_Murder_Is_Forever?oldid=45624"
Community content is available under CC-BY-SA unless otherwise noted.