An Embarrassment of Bitches

An Embarrassment of Bitches is the thirteenth episode of the fourth season of Castle.

When a famous dog trainer and show judge is killed, the investigation keeps coming back to charismatic reality TV star Kay Cappuccio (guest star Hilarie Burton). Kay, a favorite of tabloids and gossip websites the world over, has achieved stardom without possessing any discernible skill or talent. But there seems to be more to her story than she is letting on -- does that include murder? 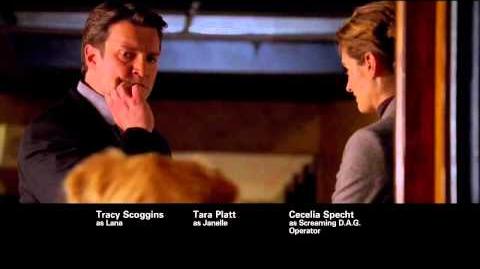 Castle: Your friend’s name is Buttons Dutton?
Martha: That is unfortunate.
Alexis: What’s so wrong with that?
Castle: Oh c’mon it’s like you calling me wrassel or tassel or No Hassle Castle. Hey...No I was just making a point...Please don’t call me that!

Castle: We could keep him here at the precinct. I mean, we could use a mascot.
Esposito: I thought that’s what you were.
Castle: What’s that? What’s that buddy? Esposito’s sense of humor fell down a well and can’t get out?

Beckett: We have reason to suspect that our killer was wearing your perfume.
Kay: Well, that's impossible. It wasn't even out yet. I'm the only person who had it.
Ryan: Does she realize she just incriminated herself?
Esposito: I said she was nice. Didn't say anything about smart.

Esposito: Get food for a dog?
Castle: Esposito.
'Esposito: Ryan.
Ryan: Castle.
Castle: Perhaps we should settle this like men.
Ryan: Two out of three.
Esposito: Snip.