The Castle Wiki welcomes you to the collaborative project that anyone can edit, dedicated to Castle, the hit ABC television series. This English wiki is the community and source for all Castle fans out there. Castle Wiki was founded on April 23, 2009 by Daboss and its current Admins are Daboss and Christy32. This wiki was founded in the United States, uses U.S. English and operative by United States laws.

If you're new or old user (for awhile) to this wiki, please look at our working site policies and Community Messages but editing or creating. Also, an image from here that are being taken other sites or wiki must link back here.
Disclaimer: The Castle wiki are not connected to (or associated with) ABC or ABC Studios. We have no contact with creator, writers or directors of Castle.

Check us out on:

And the official Castle social sites and apps here:

Go to these sites for info or for help with your own wiki!

ABC • A Million Little Things • Agent Carter • Agents of S.H.I.E.L.D. • The Baker and the Beauty • Black-ish • Castle • The Catch • The Colbys • Designated Survivor • Desperate Housewives • Dynasty • For the People • Fresh Off the Boat • The Good Doctor • Grand Hotel • Grey's Anatomy • Happy Endings • The Heiresses • How to Get Away with Murder • Inhumans • Lost • The Middle • Modern Family • Nashville • Once Upon a Time • One Life to Live • Pretty Little Liars • Private Practice • Quantico • Revenge • Roseanne / The Conners • Scandal • Station 19 • Supernanny • Twin Peaks • Who Wants to Be a Millionaire

Go to these sites for info or for help with your own wiki! 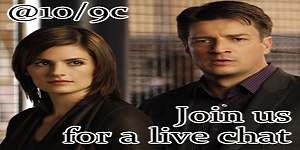