Child's Play[1] is the fourth episode of the seventh season of Castle.

When an ice cream vender is shot, evidence leads Beckett and Castle to believe that an unknown second-grader may have vital information about the case. Castle goes undercover at an elementary school to try and identify the second-grader but nothing goes as planned. 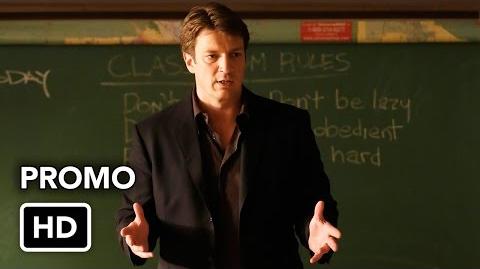 Castle: No, no, this girl – she’s ready to open up to me. We have … a special connection.
Beckett: Really? Should I be worried?
Castle: Only that I’m going to solve the case before you.
Beckett: Oh.

Emily: I’m Emily. Who are you?
Beckett: I’m Kate. I’m Mr. Castle’s … friend.
Emily: Do you like to play princess with him?
Beckett: Uh…sometimes.
Emily: Are you two getting married?
Beckett & Castle: One day.

Beckett: So, basically we're looking for someone who won't intimidate them? An adult presence, in the classroom that eight year olds will view as a peer, someone that they can consider one of their own?
Principal Joe Silva: Okay, but where would we find someone like that?
Castle: Got it! Easy.

Castle: Being 90% kid myself, I have an ability to get into the minds of children. And I have the perfect plan.
Mrs. Ruiz: Trust me: there is no such thing.

Castle: I'm sure I can handle anything these little charms throw my way. In this case, an eraser.

Alexis: And where do you think your going?
Castle: Um, second grade?

Jason: I'm not talking to Mr. Castle, he's a jerk face!
Castle: Okay, you know what, he's the jerk face!
Beckett: He's eight years old. You've been here for a day and a half and you already have a nemesis?

Retrieved from "https://castle.fandom.com/wiki/Child%27s_Play?oldid=44320"
Community content is available under CC-BY-SA unless otherwise noted.