Cops & Robbers is the seventh episode of the fourth season of Castle.

When Castle and Martha are taken hostage by a crew of bank robbers dressed in hospital scrubs and using classic television doctor names, Beckett finds herself on the outside, desperately trying to rescue them — which proves to be even more difficult with a by-the-book hostage negotiator watching her every move. Castle becomes the de facto leader of the hostages, and discovers that the robbery is actually a skillfully orchestrated distraction for an even more sinister plan. But with Castle stuck on the inside and Beckett on the outside, will either be able to foil the bank robbers’ plans before it is too late? 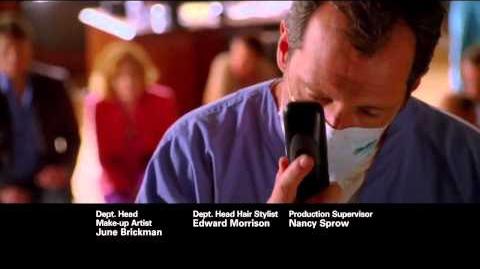 Beckett: What do you want, Castle?
Castle: Tell me you need me.

Captain Peterson: Wait, we got a cop in there?
Beckett: He’s a civilian investigator. He and I were on the phone when they took over the bank. He said that there are four suspects in there, they’re dressed up in doctor’s scrubs.

Esposito: I don’t get it. This is a little old retired librarian. What could possibly be in her safe deposit box that would be worth all this?
Ryan: Nazi gold, cold fusion, map to Atlantis.
Esposito: Hey! Castle junior. Could you maybe start thinking like a cop, please?
Ryan: I am.
Esposito: Are you?

Trapper John: I'm gonna make pretty red stains out of your boyfriend, Kate. I got my gun to his throat and I'm gonna paint a Jackson Pollock with his insides.
Captain Peterson: You need to calm him down.
Beckett: Listen to me, jackass. I do not control traffic. So you're gonna have to give me 20 minutes.
Trapper John: Now you got one minute, Kate.
Beckett: No! I've got 20. Do you hear me? 20. Because if you pull that trigger, I will walk through those doors and personally put a bullet through your skull.
Trapper John: Ok, Kate, you got 20 more minutes.
Captain Peterson: Well, that's one way to negotiate.

Castle: Even as a hostage I help you solve murders. Beckett, I think .. I think you have the perfect partner.
Beckett (Beckett laughs): Yeah, except he doesn't like doing paperwork.