Cuffed is the tenth episode of the fourth season of Castle and mid-season finale until the new year.

Beckett and Castle awaken to find themselves handcuffed together with no memory of how they got here - wherever here is. Meanwhile, Ryan and Esposito are basically asking the same question - Where are Beckett and Castle? 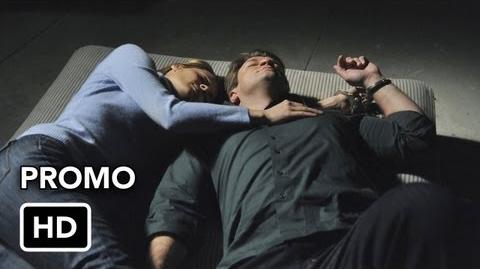 Esposito: This isn't the most secure building.
Castle: I saw a camera in the lobby.
Esposito: It's dummy.
Lanie: It's not the only one.

Castle: Do you know what Esposito and Lanie were fighting about?
Beckett: Everything.

Lanie: Javi.
Esposito: What?
Lanie: I can feel your impatience down my backside.

Esposito: Is that a tiger?!
Castle: Yeah.

Beckett: What do we do now?
Castle: There’s only one thing to do. Scream like little girls

Beckett: No, Castle. I did not survive a bullet to the heart to die as tiger kibble.

Ryan: Oh God.
Esposito: It ate them.
Beckett: It didn't eat us.

Beckett: But next time, let’s do it without the tiger.
Castle: Next time?