Deep Cover[1] is the twelfth episode of the sixth season of Castle.

The murder of a young video store clerk takes a strange turn when the team discovers his past history as a high-level hacker. But it’s nothing compared to the shock Castle receives when their investigation leads them straight to his father, Jackson Hunt (guest star James Brolin). 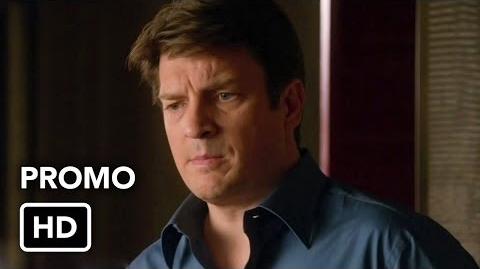 Beckett: Hey! Look who's back from paternity leave. So how's Sarah Grace?
Ryan: Oh! Man. I tell you, she is just... my perfect little angel.
Beckett: Oh, she's so cute. Wow.
Esposito: Yeah.
Beckett: Is it me or -- or does she... look a lot like Esposito?
Esposito: Yeah, she does.
Beckett: Wow.
Ryan: Really, Beckett? I expected that from jackass but not from you.

Martha: For years I wondered if your father was the one who got away. Well, now I finally know.
Castle: He was never worth your time.
Martha: Oh, yes he was! First time I met him, he gave me the greatest gift of my life: you.

Retrieved from "https://castle.fandom.com/wiki/Deep_Cover?oldid=44300"
Community content is available under CC-BY-SA unless otherwise noted.