"You want to know why I killed Derrick? There were no more surprises. I knew exactly what was gonna to happen every moment of every scene."
—Castle, explaining his decision to (retire) Storm[src] 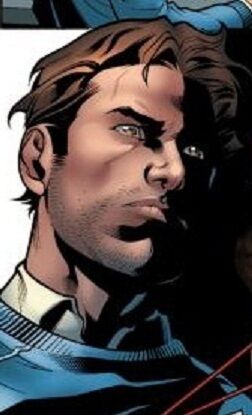 Derrick Storm is the lead character in a series of mystery novels by Richard Castle.

Derrick Storm started out in the first novel Derrick Storm as a private investigator who had tracked down Jefferson Grout after a period of four months, unbeknownst to Storm that Grout was actually Daniel Sanchez, a rogue CIA agent.

After he was nearly killed by Grout, he was contacted by an impressed Clara Strike, telling him the Agency had been looking for Grout for a year. She had enlisted Storm's services to help track Grout again, a pursuit which led him to Nicaragua, where Strike and Storm worked together towards finding Grout before Strike faked her death, as mentioned in A Brewing Storm.

Strike's apparent death had affected Storm deeply, and he was tormented further when he discovered that her fake death had been engineered by Jedidiah Jones, the director of the CIA's National Clandestine Service (CIA's recruiting division) for "the good of the country."

Storm had retrieved a stash of gold stockpiled by Grout and his previous accomplices, and had successfully funneled them back into the United States and invested into his enterprise. A year later, he was forced to work with the CIA again when they threatened to investigate the nature of his fortunes.

In the subsequent novels, Derrick Storm and Clara Strike became partners and lovers, with Storm working as a frontman for the CIA, since the agency was forbidden from operating in the United States. Meanwhile Strike had introduced Storm to Jones, where Jones took an interest in Storm's talents and included Storm in a number of covert operations, acting as his mentor.

It was during his tenure as a conscripted CIA operative that he was made a part of Operation Tangiers, aimed against the Jihad group's leader 'The Viper' which had gone badly wrong due to betrayal from within the CIA and had almost resulted in Storm's death. The events had prompted Storm to stop trusting anyone, even doubt his own abilities as an operative and enter retirement. It was Jones who had saved Storm's life in Tangiers.

Storm apparently dies in Clara Strike's arms in the book Storm Fall. This decision of Rick to kill off Derrick Storm received backlash from several readers of the series, but Rick defended it as he felt that he had reached the peak of what he could achieve with Storm, feeling that the character had become too predictable and he always knew what Storm was going to do.

It is later revealed in A Brewing Storm that he had faked his own death with the help of the CIA and retreated to Montana, believing this to be the only effective way to enter retirement.

Four years after the events of Storm Fall, Jedidiah Jones calls in 'Tangiers', bringing him out from retirement to assist on the case of the kidnapping of a Texan Senator's Step-son. As he meets Jones again, he asks Jones to keep Clara Strike oblivious of the fact that he is alive.

In A Raging Storm, he assumes the alias Steve Mason and assists FBI special Agent April Showers who is working on the case of the murders of Senator Thurston Windslow and his stepson Matthew Dull. Working with her, he suspects and finds that Showers may be taking the place that Strike once had in his heart.

In A Bloody Storm, he finally finds out who all had betrayed the CIA in Tangiers, and the deaths of the traitors give him some measure of closure. At the end of the novel, we see Showers asking Storm out for dinner, with Storm happy at the prospect.

Retrieved from "https://castle.fandom.com/wiki/Derrick_Storm?oldid=45069"
Community content is available under CC-BY-SA unless otherwise noted.