Disciple[1] is the ninth episode of the sixth season of Castle.

Castle and Beckett arrive at a crime scene to discover that the female victim bears a shocking resemblance to Medical Examiner Lanie Parish. As the team tries to make sense of this mystery, they realize the killer may be targeting detectives of the 12th Precinct.

Annie Wersching (“24”) guest stars as Dr. Kelly Nieman, an exclusive Manhattan cosmetic surgeon who draws Castle and Beckett's interest because of her connection to the victim. 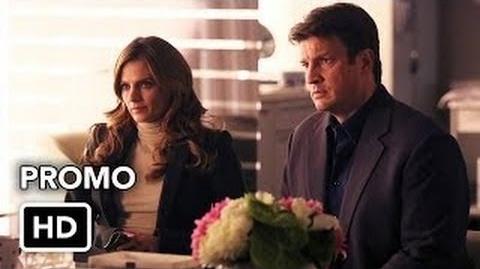 Lanie: They say we all have a twin out there somewhere. I guess this one's mine.

Castle: Can I say something that will probably annoy you?
Beckett: Since when do you ask for permission?

Lanie: So who is he going to go after now? You and me? Some version of Ryan and Beckett? What if this is just the beginning?
Esposito: It’s gonna be okay. I promise. I won’t let anything happen to you.
Lanie: Yeah. What if something happens to you?
Ryan (burst in the door): Hey.
Esposito: Dude... we're having a moment here.
Ryan: Sorry. I found the strip club where Santos work.

Esposito: Alright, fine. I want to find this piece of garbage, string him up and see how he likes it. There...I shared a feeling. Happy now?
Ryan: See...don't you feel better?
Esposito: Ryan.
Ryan: Alright.

Carl Matthews: Ow.
Castle: Where is 3XK? Where is he?!