Eye of the Beholder

Eye of the Beholder is the fifth episode of the fourth season of Castle.

A wealthy museum patron is a suspect when a valuable sculpture is stolen. Castle and Beckett investigate the theft with the help of an insurance investigator who seems to set her sights on Castle.

At an art museum banquet, a man named Mr. Hayes is late. However, when a fellow assistant goes to find him, she finds him dead; impaled on another piece of art.

While working on a novel, Castle is told by Martha that she is holding her acting class at the house and wants him to be there...with hopes of fixing him up with a female student. She is concerned about his social life saying all he has been doing is writing and working with Beckett. Just as she is asking if there was a "reason" why he hasn't gone out and pursued a romantic relationship yet, Castle is phoned about the murder at the museum. At the museum, they are informed of what they know about the murder and find out an expensive 50 million dollar worth piece of art has also been stolen. They are confused as to how the thief stole the piece due to the high tech security. Esposito and Ryan go on to interview workers and what they knew of the victim and the stolen art piece.

Just as Castle and Beckett think they figured out how the victim was murdered, Serena Kaye, a smart, sexy insurance investigator, joins them in the investigation giving in her own opinions of how the thief was successful in his plan and offers her services as a consultant. While Castle wants to take Serena up on her offer, Beckett dismisses Serena and her theories since she has no proof of them. Eventually, Castle manages to get Beckett to see if Serena was right about her theories.

At the precinct, Castle is informed by Beckett that Serena had been right although she insists it was just a "lucky guess". Beckett is soon called in by Gates to her office where she sees Serena in the room, clearly surprising her. Gates tells Beckett of Serena's proposal to work with them and, despite Beckett insisting she prefers working with her own team, Gates feels that Serena will be a "valued add for a change". Serena smiles at Beckett and tells her she "looks forward to working with her" and offers a hand shake, which Beckett begrudgingly accepts, obviously not liking her.

As the group goes on to work together, Serena finds a lead on who the thief may be goes to pursue it with Castle telling Beckett that the people "won't talk to cops". Both groups continue into finding leads and who may have been the thief and killer. As the investigation continues, it becomes obvious that Serena is interested in Castle and him back. This clearly spiting jealousy in Beckett as she rants to her therapist that Serena is a "uncooperative, cocky, stubborn, know it all". Her therapist asks why it bothers her to see Castle "smitten" with Serena and she is near lost for words as she finally says because Castle was supposed to be her "partner" and on "her team" not Serena's. Her therapist then just simply asks what she was really scared of, that Castle won't wait for her...or that he will. Meanwhile, Castle voices his interest in Serena to his mother back at his loft. She then asks Castle about his next "move" confusing him. She then says that Beckett has made it plain that she’s not available, for now, and now that he's met this woman who's "smart, incredibly attractive" and that he's completely "intrigued" by her why not ask her out. To which Castle says because it's "complicated".

At the precinct a little while later, Beckett and Castle run into each other. She asks brings up Serena and he asks if she thinks he should "pursue" it which she says to do what "suits" him. The teams then finds evidence that suggests that Serena was in on the scheme. When Gates orders them to find concrete evidence that puts Serena as the thief, the team comes up with plan. Beckett arranges a plan that has Castle ask Serena out on a date while she and Esposito check Serena's hotel room and for Castle to stall Serena on their date long enough for them to find something. While Beckett and Esposito go through the room while Castle is out for dinner in the hotel dining lounge, Esposito points out how Beckett is determined to "nail this chick" for the crime. When Beckett answers it was their job to "catch bad guys" he says that it "seems like it might be more than that".

On their date, Castle learns from Serena that she was a "art retriever" stealing art pieces that had already been stolen and giving it back to the rightful owner. Castle says she was the "female version of Indiana Jones" without the hat and whip. Serena says, "Well, just without the hat." In the hotel room, Beckett soon finds emails on Serena's tablet. At this moment, Serena suggests to Castle that they "skip dessert" and go up to her room for a "drink". Despite his efforts to stall, Serena goes on to take him up to her room. As she does, Castle sends Beckett a text, warning her to get out. However, Beckett finally finds her needed evidence to pin Serena as the art thief through the emails on her tablet that guilt her for theft and she goes to tell Esposito, leaving her phone on the table, who is going through a suitcase and finds a bunch of equipment under her clothes which are shown to be ISI.

Castle receives a text from Beckett as he and Serena walk up to her suite, which says they were leaving and to stall Serena for a few minutes longer. However, as they approach the door Beckett and Esposito begin to open it. In a panic, Castle grabs Serena and kisses her to distract her. Beckett and Esposito walk in on the kiss and Beckett, clearly upset, interrupts them with a loud, "Hey!" before declaring Serena was being arrested for theft...and murder.

Castle tells Beckett that he doesn't think Serena is the real thief/killer. But Beckett refuses to believe it saying he was "thinking with the wrong body part" and that he is "compromised", before going to interrogate Serena alone. While she interrogates Serena, Beckett is told of Serena's job as an art retriever and it soon becomes clearer than perhaps Serena isn't the real thief/killer after all. Serena soon tells Becket that she's "done her homework" on her and says that she's a "smart methodical cop" with "great instincts" and that those instincts are telling her that she's innocent, but that for some reason she is ignoring them and asks her why. Beckett easily avoids the question and Serena gives her alibi and offers to give them evidence on who Falco, a prime suspect, is. They manage to find out together through evidence that a man named Holt help smuggle the art piece by disabling the security system having been payed by the original rich owner of the piece, who killed the victim when he came across her attempting to steal it.

At the precinct, Beckett makes amends with Serena and tells her that Castle never believed she had anything to do with the murder even when she (Beckett) didn't. Serena asks why Beckett was telling her this and Beckett tells her that, while clearly sad while saying it, but hiding it, she "should know what kind of person she was dealing with". Castle comes up to them and hands them each a cup of coffee and Beckett awkwardly leaves, confusing Castle who picks up on the tone. Serena then tells him she was going to go back to her hotel room and that she would ask him to come with her, but she "doesn't steal things that belong to someone else" and kisses his cheek before leaving. Beckett comes back out and is surprised to see Castle didn't leave with Serena. Castle jokingly says it was because he "couldn't afford it" before showing her a bill the museum billed him with for destroying an exhibit while solving the murder. Beckett says that "the least the NYPD could do is take him out for a hamburger" which Castle accepts. As the two leave, Castle says he could "put Alexis through college on this" and Beckett adds, "And med school." The episode ends as Castle says, "Thank god I'm rich." 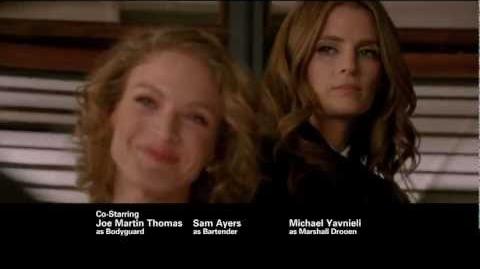 Serena: I wanna thank you. I couldn't have done this without you. I'm really grateful.
Beckett: So does that mean you're cutting me in on the finder's fee?
Serena: I'm not that grateful.

Serena (to Castle): I'm going back to my hotel. I would ask you to come but, it's like I said, I don't steal things that belong to someone else.