Food to Die For

Food to Die For is the twenty-second episode of the second season of Castle.

Castle and Beckett's investigation into the murder of a chef, who recently won a reality cooking show, results in her reconnecting with an old high school friend, Madison Queller, the owner of the restaurant where the victim worked. And while Beckett's relationship with Demming develops, Castle pursues Madison, but whether for romance or information on Beckett's past for one of his books isn't clear.

Balthazar Wolf, star chef of the trendy restaurant Q3, is found frozen solid from a spill of liquid nitrogen all over him. His boss was Madison Queller, an old friend of Beckett's, who implores her to help investigate the case. Castle likes Madison, but maybe that's only because she knows all these dark secrets about Beckett.

David Nicolaides explains how Wolf was taken in by his family, which helped start his career as a chef. David further explained that Wolf was in financial straits, having had to ask David to buy out his share of the family diner not long ago. However, Wolf recently had given Domingo Verdugo, a co-worker, $5000, which was part of a huge amount of cash he was carrying around in a knapsack.

Wolf wished to leave Q3, but Madison had an insurance policy on her chef, saying that she'd get the payout if Wolf died. Madison and Castle are in the middle of a date at Rocco DiSpirito's restaurant when Beckett interrupts them, after having her own date with Detective Tom Demming interrupted. Madison suspects that Beckett broke their date up intentionally, suggesting that Beckett has the hots for Castle.

Demming has dug around a little more and discovered that Wolf had a gambling debt which he eventually paid off. He gave up an engagement ring as collateral. But who was the ring for? Wolf placed the ring in a cake he made the night of his murder. His potential fiancee? Cecily Burkett, David's girlfriend. Wolf got Cecily pregnant, but she didn't think that Wolf (with his wild ways) would have been a good father for her child. So she dumped Wolf and decided to stay with dependable David, and pretend the child was his. However, David found out the real story and killed Wolf.

Castle points out that none of this trouble would've happened if Cecily had done the right thing and followed her heart in the first place. He's probably suggesting the same thing in regards to Beckett. Beckett replies by saying that men like Wolf will always let you down, so why risk it? 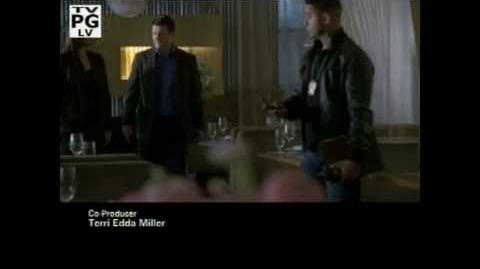 Madison Queller: No, no, no, no, no. I get it. You’re hot for Castle. You wanna make little Castle babies. Why couldn't you just be honest?
Beckett: Maddie.
Madison: What?
Beckett: He can hear us.

Beckett: I'm not ignoring. I'm just rechecking. I asked her to stay in town in any case.
Castle: Yes, I know. I heard... everything.

Castle: You ask me... she should've followed her heart-- left David, gone with Wolf.
Beckett: You know, I can see the virtue in staying. I mean, guys like Wolf, they come in, they upset the apple cart. Of course he makes you feel alive, but eventually, you know he's just gonna let you down. So why risk it?
Castle: Because the heart wants what the heart wants.

Castle: You don't really think she did it, do you?
Beckett: Well, until I can rule her out, it doesn't matter what I think. She has motive.
Castle: Yeah, she also has an alibi, which you're conveniently ignoring.

Madison: Oh, really?
Beckett: Yes.
Madison: Rick's behind the mirror?
Beckett: Yeah.
Madison: Oh. Like on tv? Hey, there! Sorry we miss the pumpkin gnocchi. they're really good. I have to tweet about this.