For Better or Worse

For Better or Worse[1] is the twenty-third episode and the season finale of the sixth season of Castle.

Castle and Beckett's long-awaited wedding is almost here, but when a shocking surprise threatens to ruin the big day, they are sent on a wild mission filled with masked men, angry bikers and a charming ne'er-do-well from Beckett's past (guest star Eddie McClintock, “Warehouse 13”). 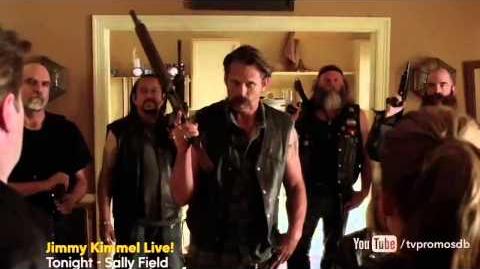 Castle: It's only a dress, it's not the end of the world.
Beckett: Then why does it feel like it is?! Our wedding was supposed to be magical, it was supposed to be our perfect day and now it's just... falling apart.
Castle: So we'll put it back together.
Beckett: Castle, I'm married to someone else. And I have no idea where he is, we don't have any leads, and to make things worse, the venue and then now this. I mean, it just feels like all of this is one big sign.
Castle: Well, maybe it is a sign. A sign that ours is a great love story. Cuz what's a great love story without obstacles to overcome? Every fairy tale has them. Terrible trials that only the worthy can transcend. But you can't give up. That's the deal. We want the happy ending... we can't give up.
Beckett: And that's why I wanna marry you.

Rogan: Kit-Kat, is that you?
Beckett: Hello, Rogan.

Esposito: It's beautiful, isn't it?
Lanie: It's perfect. I can't believe Alexis and Martha pulled this off.
Esposito: Now all we need is a bride and groom.
Lanie: The wedding's less than 24 hours away. I hope they make it.

Ryan: Um... Alexis? I haven’t gained this much daddy weight.
Alexis: That can’t be right. I double checked the size ten times.
Esposito: Hey, maybe you finally hit that growth spurt you’ve been waiting on, bro.