Headhunters is the twenty-first episode of the fourth season of Castle.

With tensions rising between Castle and Beckett, Castle finds himself a new partner — Detective Ethan Slaughter (guest star Adam Baldwin, Firefly), a tough and colorful cop from the city's gang unit. But Castle gets more than he bargained for when Slaughter shows him a grittier side of police work that puts Castle in the line of fire like never before. 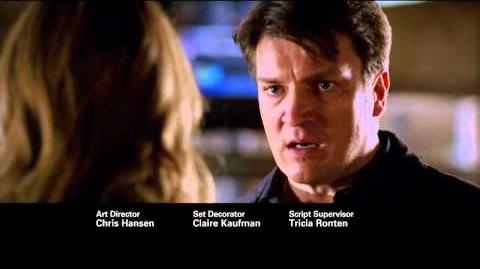 Castle: So… they call you the Widowmaker.
Det. Ethan Slaughter: Hey, not my fault they keep sticking me with idiots. Speaking of partners (refer to Beckett), I’ve seen pictures of yours. She’s smoking hot.

Castle: Besides, guys like Slaughter they just float from precinct to precinct. You know, they’re like nomads wandering the streets of New York City kickin’ ass and takin’ names, which isn’t the most original turn of phrase, but the character is so great. It’s really gonna help me shake up this next Nikki Heat book.
Beckett: Yeah, sure. If you live long enough to actually write about it.

Dr. Burke: You're upset.
Beckett: No. Yes, okay? fine, yes, I thought that the two of us were actually getting closer together, and now it seems like he is just pulling away.
Dr. Burke: Have you asked him why?.
Beckett: Yes and he said “Oh everything is fine”
Dr. Burke: What makes you think it isn't?
Beckett: Because he´s acting like a complete jackass. He shows up at the precinct with these bimbos hanging on his arm and now he's just running around with another cop.
Dr Burke: Is this other cop a woman?
Beckett: No. No! Why-why do you even ask that? That's not even the point, the point is I don't understand why he is acting like this. I mean, what did I do?