Heartbreak Hotel is the eighth episode of the fourth season of Castle.

During the investigation of the murder of an Atlantic City casino owner at an abandoned warehouse in New York, strong leads emerge for the team in both NYC and AC. As Beckett and Capt. Gates work the New York leads together, Castle naturally chooses to join the detectives for the road trip to "America's Playground," hoping to help solve the case while throwing an impromptu bachelor party for Ryan. 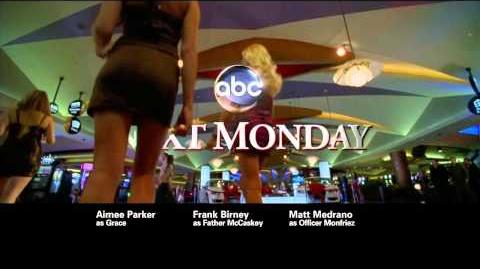 Castle: How about just a low-key evening with your girlfriends. You guys can have a John Hughes marathon and fill out a Cosmo quiz.
Alexis: Dad, the 80's just called. It wants its plan back.

Castle: Well, you gotta know when to hold 'em. And, when to fold 'em.
Esposito: Know when to walk away, and when to run.
Lanie: Detective Esposito. A little respect please? I mean, there is a dead body here.

Esposito: What are you doing?
Castle: What does it look like? Did you think I was gonna pass up a road trip to the Boardwalk Empire, the east coast epicenter of dancing, gambling, showgirls, and sin?
Ryan: You do realize we’re going there to investigate a murder, don't you?
Castle: Gentlemen, if I have learned one thing it’s not to let a little thing like murder get in the way of having a good time. Oh, and also, shotgun.

Castle: Do you keep former guests in the system?
Daniel Sullivan: Sure do. That’s how we flag gamblers with priors.
Castle: What about me?
Daniel Sullivan: Let’s see. Richard Castle
Castle: Oh
Daniel Sullivan: Resident of New York City
Castle: Mmhmm.
Daniel Sullivan: Disorderly conduct, resisting arrest, 2003 and... wow. Apparently, the last time you were at The Sapphire you accidentally set a mattress on fire and the drapes were covered in jam.
Castle: That was a fun night. Check.

Esposito: This is humiliating. We’re homicide detectives. We're the NYPD.
Ryan: Unfortunately we're in New Jersey. At least we’re not on a ticking clock because a woman’s been kidnapped. Oh, wait! We are!