Heroes and Villains is the second episode of the fourth season of Castle, and the sixtieth overall.

When an ex-con is mysteriously slain in an alley, Castle and Beckett believe a vigilante is behind the murder. But efforts to identify their suspect are thwarted when they discover that he roams the city in a costume — and may indeed be a Superhero. Can they capture and unmask the killer before he strikes again? 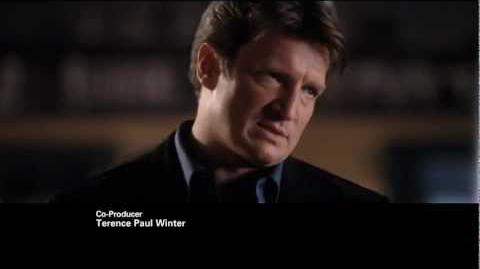 Martha: Lady Beckett, my lord. Richard, are you crying?
Castle: No, it's the onions.

Castle: Oh!
Esposito: Yeah, tell me about it.

Lanie: Split right down the middle. From the top of his head all the way down to his-- Please. The guy was sliced in two. I'd say his unit is the least of his problems
Castle: Then you do not understand the sacred bond between a man and his unit.

Castle: If you could be any comic book character in the world who would you be?
Beckett: Elektra.
Castle: Ah, a ruthless assassin who hides from her emotions.
Beckett: No, well maybe it’s because she’s got bad ass ninja skills. What about you? Iron Man? Spiderman? No, wait! I know: Annoying Man.
Castle: Try billionaire industrialist Bruce Wayne, a.k.a. The Dark Knight. He’s brooding. He’s handsome. And he’s got all the coolest toys.
Beckett: Wow, digging deep on that one.

Ryan: I mean, haven't you ever wanted to be a superhero? Going out there, prowling the city, knocking some heads?
Esposito: I do that now

Beckett: You have avengers number one?

Beckett: They are fought by the loss of a love one

Castle: A writer and his muse fighting crime. Just like us.

Beckett: You know, Castle, you might want to tone down the theories until Gates warms up to you.
Castle: Oh, I plan to melt Captain Permafrost by solving this case.

Beckett: Yeah, but she's growing up, Castle. That's what you want?
Castle: Yes.

Castle: And there’s more where that came from. You’re welcome to peruse my issues anytime. Please note how the killer has drawn inspiration from costumes of other superheroes. For example, the color scheme evokes Spider-Man. The horned helmet, obviously an homage to Daredevil. The sword and scabbard, Deadpool. The high collar, just like Black Panther. Now, what do these characters all have in common?

Castle: Whoa. You smell that? Wafting scent of printed pages? Comicadia. Beckett, this place is the premiere comic book shop. It’s the Vatican to a Catholic. It’s Mecca to a pilgrim. It’s upstream to a spawning –
Beckett: I know, Castle. I bought my first comic here when I was fourteen. Sin City. "A Dame to Kill For."