Kevin Ryan is a homicide detective for the New York Police Department, working alongside detectives Esposito, Beckett and their consultant, Richard Castle. He is portrayed by Seamus Dever.

Ryan grew up in the Bronx with three older sisters, Karen, Stacey and Gwen. Gwen has two daughters. One of Ryan’s other sisters has a son who loves the Captain Underpants series. Ryan’s parents successfully raised him and his three sisters, including putting food on the table and giving them piano lessons.

Ryan began his law enforcement career working in the Narcotics division of NYPD before becoming a homicide detective. When he was new in the narcotics division, back when he was still clueless and “green” about how busts work, there was one major case where they were just about to bust a street gang cooking meth. While his colleagues were taking the members’ statements, he was left answering phones in the squad car when Alisha, the girl who tipped them about the street gang, calls asking for their lieutenant. He called out to their lieutenant and announces the name of the girl. Now that the gang knew who sold them out, they knew they would look for her so they searched for her before the gang could get to her. Although they could find the girl and put her into witness protection, Ryan was still embarrassed about the incident, saying it was “the stupidest thing [he’d] ever done as a cop.”

Ryan is also the latest addition to Beckett's team at the 12th Precinct, so he was apparently referred to as "the new guy" often.

Ryan takes quite a lot of stick in the early episodes of season 2 about his "invisible girlfriend", but when Jenny finally does put in an appearance, she charms the whole team, making nothing but positive comments, and showing how much Ryan has spoken about them. Esposito's explanation of why Ryan didn't introduce her sooner, "so we wouldn't try to steal her from him", seems to make sense.

In the buildup to the wedding, he is understandably jittery. Esposito pours gasoline on the flames by suggesting, in "Cuffed", that an upcoming road trip is Jenny's chance to get him alone,

with no bolt hole, and put any questions she feels she needs to ask before the big day. That day, however, does come in "Till Death Do Us Part", and Ryan's joy, pride and love are palpable, and matched by Jenny's.

In "The Wild Rover", she reveals that she is pregnant with her and Ryan's child. In "Under Fire", she goes in labor after Ryan gets trapped in a burning building, but he got out just after she had given birth to their baby girl, Sarah Grace Ryan.

Ever since their daughter was born, he stated that Jenny had lost her job and with all the baby expenses, he barely making ends meet and got second job working nights as a security guard at a strip club "Manhattan" in "Clear & Present Danger".

In was revealed in season 8 premiere that Jenny's pregnant with their second child, which makes their daughter a big sister. In "Death Wish", she gives birth to their baby boy, Nicholas Javier Ryan.

A former romance of Ryan's who returns to his life in "The Wild Rover". When Ryan was undercover as Fenton O'Connell in Bobby S's Irish gang, he entered into a romance with Siobhan.

When he left the gang seven years prior to the episode, she fell on hard times and began snitching on the gang. She is connected to the

murder of Jimmy Wheelen and brought into the precinct, becoming upset with Ryan upon realizing he is a cop and married. She is eventually discovered to be a rat by Bobby S's gang and she is nearly killed, but with Ryan's help, the gang is apprehended, and Siobhan enters the Witness Protection Program. Siobhan and Ryan reconcile at the end of the episode, with Ryan assuring her that while his persona in the gang wasn't real, his feelings for her were.

Generally speaking, Ryan is the more level-headed of the two, less inclined to get bent out of shape by challenges to his masculinity, or to make reckless, fate-tempting remarks. One of the few times this is clearly not the case is in "Kick the Ballistics" when he discovers that his old service weapon, the one taken off him by Jerry Tyson the 3X killer, in "3XK", has been used in another killing.

He wants Javier for his best man, but also doesn't want to start things off on the wrong foot with his soon-to-be in-laws. Ryan is also the one willing to say something when Beckett goes off the reservation in "Always", an extremely brave stance as it jeopardizes his friendships with Javier and Castle. Ryan never tries to compete when Esposito tells his old war stories, but shows the same kind of loyalty that Javier describes in his closest service buddies.

When Esposito puts everything on the line for his former partner, Ike Thornton, in "Den of Thieves", Ryan backs his play, not without question, but wholeheartedly. Despite the tension between the two after his betrayal in "Always", Ryan redeems himself with Esposito when he takes a punch to protect him in a fight in "Cloudy with a Chance of Murder".

In "Till Death Do Us Part", Esposito was his groomsmen in his wedding, along with Castle.

He even told Esposito how he wasn't sure if he's ready to start a family with Jenny in "Secret Santa".

When both guys got trapped in a burning building, Ryan told Jenny, who was in labor, that if heir child was a boy to name it "Javier" after his partner, and Esposito asked him "You're gonna name a white Irish kid Javier?" Ryan asked, You're gonna bust on me now for being sentimental?" Esposito told him that it might be his last chance. But both men got out alive and embraced their friends in a group hug, including Jenny and Lanie.

In Montreal, he told Esposito how Jenny was out of work and how he's barely making ends meet with taking care of Sarah Grace.

In "Kill Switch", the two partners discuss a general conversation about Sarah Grace, who is growing up so fast.

He and Esposito regularly tease Beckett, but they are incredibly protective of her and ultimately treat her like one of the guys. He even saved her life in "Always". He referred to her as family in "Tone Death".

Esposito and Ryan develop a good friendship with Castle, and usually team up with him on teasing Beckett. Lanie once described the three men as 'like Sex And The City, only with boys'. ("Overkill") As time goes on, Ryan, in particular, begins to adopt some of Castle's mannerisms, occasionally making up extravagant/exaggerated theories about their current cases when Castle is absent or when he and Esposito are acting alone, such as when he and Esposito were searching for a suspect ("Law & Murder"), analyzing crime motives (Heroes and Villains), or when Castle was being held hostage ("Cops & Robbers").

Mostly, Castle always likes to pick on him with Esposito. He even gave him a shepherd pie recipe, since he thinks of him as a family (Law & Boarder). Both he and Esposito are his groomsmen, since Castle was his at his wedding in Till Death Do Us Part.

Not that much to be said about Lanie and Ryan, except when she sees him sneeze due to his allergy in "The Squab and the Quail", and that she call him by his first name.

Frank Kelly is Ryan's brother-in-law. He is married to Ryan's sister, Gwen ("At Close Range"). He was a unaware, minor part of the assassination plot in "At Close Range" to kill Carolyn Decker. Former cop who works security.

Ryan has a very sarcastic sense of humor, often making jokes with a deadpan expression. An obvious geek, he holds a wealth of obscure knowledge which he uses to have serious debates about the possibilities of Castle's outlandish theories. He makes a habit of letting his mouth get ahead of his thoughts, resulting in several rather awkward moments and occasionally calling his social skills into question. He is, nevertheless, extremely smart and charming, albeit a bit paranoid at times.

When pressed, he can become severely panicky (especially if he feels that he is at fault), though this is exceptional and he tends to keep his feelings to himself. It is this, combined with his loyal and protective nature. That allows him to stay calm and help others in the face of danger. He may have a touch of the blarney in him, as he occasionally weaves tales as lurid and far-fetched as Castle's own.

Ryan may well be a better 'pure cop' than Esposito, in the sense that he believes no one is superior to the law. And is not as willing to make exceptions as Esposito is. This is what leads him to accept Montgomery's guilt more quickly, and to inform Captain Gates when Beckett, against orders, goes hunting Cole Maddox.

Also, probably because of hanging around Castle too much, Ryan has begun to form irrational theories during their investigations and even narrates them in long, strings of words like Castle does, albeit less far-fetched in comparison to Castle's.

Ryan status, as an Irish-American is never in doubt, but is rarely played for stereotype. He is not called upon to go undercover in the Westies or anything similar, and has no known drinking issues. Having said that, he himself has been willing on occasion to trade on his artistic bond, as when he "interviewed" Bridget McManus's four brothers in "The Dead Pool". His condition on returning to reprt suggests that considerable quantities of alcohol were involved in establishing their communal alibi, which was leprechaun tossing. 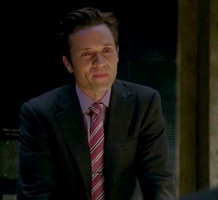 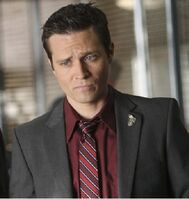