Kick the Ballistics is the fourth episode of the fourth season of Castle.

While investigating the mysterious shooting death of a young woman, Castle and Beckett face a cop’s worst nightmare when they discover that the gun used in the killing is Det. Ryan’s old service weapon – the one that was stolen by the serial killer, 3XK. Now with the clock ticking, the team must work to solve the murder, track down 3XK and retrieve Ryan’s gun before the killer strikes again. 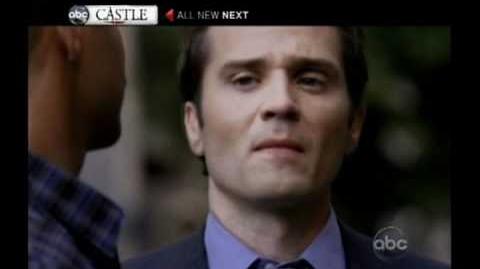 Castle: So, how’s Ryan holding up?
Esposito: Three days after my last tour in Iraq, I’m at a diner with friends. A car backfires. My friends look around, I’m under the table. Ryan’s just waiting for the next hit.

Beckett: You guys took a helluva chance.
Ryan: Beckett, you’re starting to sound like our boss.

Castle: You know, Ryan, none of this is your fault. The fact that he used your gun...
Ryan: That weapon was issued to me by the City of New York. I let it out of my hand, and now a woman is dead. So please do not tell me that it's not my fault.