Kill Shot is the ninth episode of the fourth season of Castle.

The team searches for a sniper who is terrorizing New York; Beckett tries to hide her worsening PTSD from Castle and the guys. 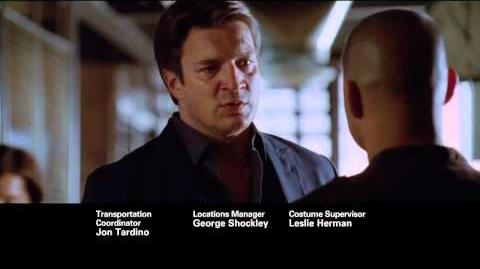 Castle: Who was that?
Beckett: Personal business, Castle.
Castle: Really? Who was it, inquiring minds want to know.
Beckett: Well if you must know, his name is Roger.
Castle: Roger?
Beckett: Don't make fun. Do you know what he has that few men have?
Castle: A Josh Groban CD? Hummel figurines?
Beckett: No, not even close. Roger has the most incredible... resistance band.
Castle: A resistance band? What is that, is that what I think it is?
Beckett: For strength training. He's my physical therapist.

Beckett: You guys, you don’t have to avoid the word on my account.
Esposito: What word?
Beckett: Sniper?
Castle: Even I noticed.

Castle: We’re gonna catch this guy.
Beckett: Yeah, like we caught the guy that shot me.

Dr. Burke: What you're describing, hypervigliance, it's a classic symptom of post-traumatic stress disorder.
Beckett: I don't have PTSD.
Dr. Burke: You were shot, by a sniper. I think it's fair to say this case is going to bring up issues. Issues you still haven't dealt with.
Beckett: Okay, then fine, I'll deal with them. Right now, I need to figure out how to make this stop.
Dr. Burke: It's not going to stop. Not without time and treatment. The psychological trauma is every bit as real as the physical trauma.

Dr. Burke: I think you should consider stepping away from the case.
Beckett: You don't think I can handle this?
Dr. Burke: I'm saying you don't have to. You're not the only cop in the city, Kate.

Beckett: What is that?
Esposito: The rifle that shot you.
Beckett: You are way out of line.
Esposito: Just look at it.
Beckett: What the hell are you doing?
Esposito: I've been where you are, I know what you're going through.
Beckett: Javi, I'm fine.
Esposito: You're not fine. You're just trying to act like you are. This is just a tool. It's a hunk of steel. It has no magical powers, and the person that fired it not some all-powerful God. Just a guy with a gun. Just like the guy we're hunting now. And like every other bad guy, he's damaged goods.
Beckett: So am I.
Esposito: That's right. And that's okay. You think it's a weakness? Make it a strength. It's a part of you. So use it.

Retrieved from "https://castle.fandom.com/wiki/Kill_Shot?oldid=45419"
Community content is available under CC-BY-SA unless otherwise noted.