Kill Switch[1] is the eighth episode of the seventh season of Castle.

When subway passengers, including Detective Esposito, are taken hostage by a mysterious gunman, Castle, Beckett and the team must uncover the gunman's agenda before it’s too late. 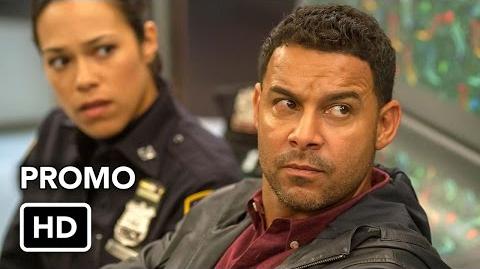 Castle: This feels different, doesn't it?
Beckett: What does?
Castle: Rolling up to a crime scene as a married couple. Like Nick and Nora Charles.
Beckett: Ooh, like MacMillan and wife.
Castle: Hart to Hart.
Beckett: Turner and Hooch.
Castle: Turner and Hooch aren't even married.
Beckett: Yeah, but you still remind me a little of Hooch.

Esposito: Hey, what kind of dad do you think I’d be?
Ryan: You’d be great.
Esposito: Even growing up with no role model?
Ryan: Well, you know, the thing of it is, you know what it’s like not having a father. You’d make sure your kid never felt that way. You and Lanie... Hmm?
Esposito: No. She like things how they are. But, you know, maybe I’m ready for more than that, you know what I’m saying? Move forward.
Ryan: Huh.
Esposito: Hey, did you hear that? That sound?
Ryan: No. What’s that?
Esposito: It’s my biological clock ticking. Tick, tock, tick.
Ryan: We were having a genuine, honest moment here, and you had to ruin it by being a jackass.

Lanie: Got any of that left over for me? Javi, I was worried sick. I thought that...
Esposito: I know what you thought, but I’m here. I’m back. I'm all right.

Retrieved from "https://castle.fandom.com/wiki/Kill_Switch?oldid=45150"
Community content is available under CC-BY-SA unless otherwise noted.