Knockout is the twenty-fourth episode of the third season of Castle, and the season finale.

Beckett’s investigation into her mother’s death is reactivated when Hal Lockwood - a professional hit man with knowledge of Beckett’s mother’s murder – stages a spectacular escape during a court hearing. As police launch a manhunt for Lockwood, Castle and the team uncovers evidence of a deeper conspiracy involving a mysterious figure with law enforcement connections who is linked to both Lockwood’s escape and the killing of Johanna Beckett. The search for Lockwood and the quest to identify his co-conspirator leads to a shocking and deadly conclusion. 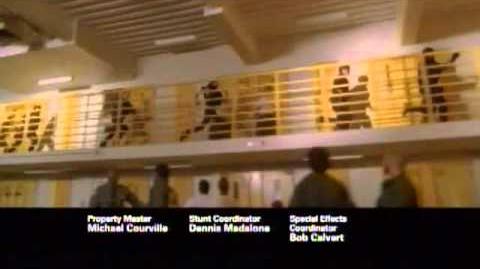 Beckett: What about you, Rick?
Castle: Of course I don’t want anything to happen to you. I’m your partner. I’m your friend.

Montgomery (to Beckett in his office): There are no victories. There’s only the battle. And the best that you can hope for is that you find someplace where you can make your stand. If this is your spot? I will stand with you.