Michael Smith is a lawyer who was an old friend of Roy Montgomery's who specialized in handling cases from the sidelines and working from the shadows.

At some point prior to 1981, Montgomery did Smith a favor, and Smith swore to repay the debt one day. He attended Montgomery's wedding in 1981 just after winning a big New York case against a tobacco company.

Just before he died, Montgomery sent a package to Smith containing files with information damaging to Senator William Bracken. Upon reading the contents of the file, Smith placed a call to the Capitol, where he (anonymously) made a deal with the Senator.

Smith would keep the files secure and keep Beckett from digging further into the case. In exchange, there would be no further attempts to kill Beckett. He contacted Castle anonymously and explained the arrangement, giving Castle the job of keeping Beckett off the case. ("Rise")

Sometime later, he contacted Castle again to warn him about the case he and Beckett were on. Smith explained that the case, which involved an attempt to discredit the Mayor, was connected to the same conspiracy. He convinced Castle to keep Beckett from discovering the connection.

Smith and Castle met in an abandoned indoor parking lot. While Smith knew that the Mayor didn't kill anyone, he left without giving Castle any evidence. At the end of the episode, they met again in the same parking lot. Smith refused to divulge the name of Beckett's mother's killer, but did drop some hints about the larger political forces at work. The attempted framing was intended to stymie the Mayor's future advancement, but that they would stop short of forcing him out of office. After all, if the Mayor stepped down, Castle would no longer be in a position to interfere in Beckett's investigation. ("Dial M for Mayor") 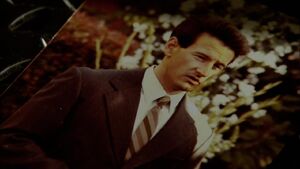 In the season 4 finale, Smith contacted Castle again regarding the robbery of Roy Montgomery's home. Smith believed it was a clean-up mission intended to eliminate any evidence that implicated the conspiracy. While this was true, Smith didn't understand that he was the intended target of the mission. Bracken had sent Cole Maddox to identify the man who was blackmailing him. Maddox succeeds, and the episode ended with Maddox confronting Smith in person, demanding the files so he can finally kill Beckett. ("Always")

In the season 5 premiere, Smith is tortured by Maddox into revealing the location of the files, despite his defiance, he eventually reveals the building they are in, though not their actual location. Maddox couldn't actually kill Smith and risk the files getting out until he actually had them in hand. So after burning one copy of the files, he left to get the other copy, leaving Smith unconscious, tied up, and barely alive. Castle and Beckett arrived shortly thereafter, having pieced together his identity on their own. As the paramedics took him away, he gave them a partial address before passing out.

This was enough for Castle and Beckett to converge on Maddox. Maddox managed to get the better of them and took the files... just in time to trigger a booby trap on the safe that killed him (and destroyed the files).

When Smith regained consciousness, Beckett and Castle demanded to know the truth. Smith replied that his loyalty was to Montgomery, not to them and not to the truth. With Bracken now threatened directly and Smith's cover blown, Smith said that his best option was to stay silent and vanish, and encouraged Beckett to do the same.

Castle and Beckett intended to press him further, but to their horror, they discovered that someone ordered Smith's protective detail at the hospital removed. Beckett and Castle raced to his room just in time to find the doctors covering his body. They explained that Smith died of a heart attack. Ryan investigated and found that the hospital security cameras had been disabled. ("After the Storm")

In ("Veritas") Michael Smith reappears to help Beckett and Castle take Bracken down. He was never killed and has been hiding, due to faking his death. He reveals to them that Bracken had been searching for a recording containing evidence in which he admits to murder, but even he doesn't believe it exists.

To that end, he had been trying to turn men in Bracken's organization but they later ended up murdered. Though Beckett offers to aid him, Smith refuses, labeling her "radioactive". He advises them to go into hiding like he did and live to fight another day and warns them against contacting him again. However, Beckett is later able to find the recording hidden inside her elephant figurines on her desk back at the 12th precinct, which cleared her name and led to Bracken's arrest. ("After the Storm")

He goes into hiding again. He lives quietly (with a dog and a woman who loves him) until Beckett finds him again in ("PhDead") to request his help in tracking down LokSat. He gives her information but warns her to stop investigating before she gets herself killed.

Castle and Mr. Smith in the same frame 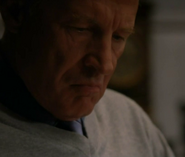 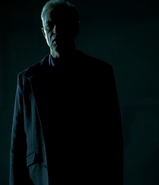 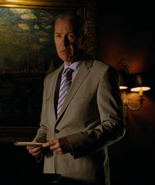 Mr. Smith discovering Cole Maddox in his home
Add a photo to this gallery
Retrieved from "https://castle.fandom.com/wiki/Michael_Smith?oldid=42415"
Community content is available under CC-BY-SA unless otherwise noted.