Montreal[1] is the second episode of the seventh season of Castle.

While the team investigates the murder of a toy company CEO, Castle uncovers a lead to his mysterious disappearance, launching him into a dangerous investigation of his own. 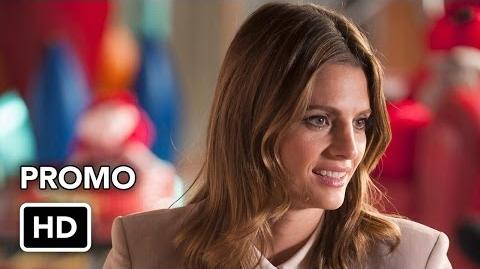 Castle: Something I should know?
Ryan: Oh, Beckett didn’t tell you? Yeah, yeah. Your disappearance kind of drove them back together. Life being short and all that.
Castle: Hmm. Disappear for two months.

Beckett: So, how goes the haystack?
Castle: Uh, apparently, you were right.
Beckett: Nutjobs?
Alexis: No, not all of them. Some are lonely women hoping for a call from the famous author Richard Castle.

Castle: Ooh, you have a date?
Martha: Uh huh. Robert. We met at the grief counseling group when you were presumed …
Castle: You – you picked up a man at grief counseling?

Esposito: Would you...knock it off? Come help me search.
Ryan: Sorry. I don't know how my parents did it.
Esposito: Did what?
Ryan: Raised me, all my sisters, put food on the table and still manage to give me piano lessons. With Jenny not working and with all the baby expenses, I'm barely making ends meet. Probably gonna have to get a second job.
Esposito: Looks like they're hiring security guards down at their warehouse. A rent-a-cop uniform would look good on you.

Retrieved from "https://castle.fandom.com/wiki/Montreal?oldid=45338"
Community content is available under CC-BY-SA unless otherwise noted.