Number One Fan[1] is the fourth episode of the sixth season of Castle.

A desperate young murder suspect, Emma Briggs, (guest star Alicia Lagano, “The Client List”) takes hostages at gunpoint then mysteriously insists that she will only negotiate with one person: Richard Castle.

Billy Miller (“The Young and the Restless”) also guest stars as Mickey Gerhardt, a hot-headed Wall Street banker who gets caught in the hostage situation.

The episode starts with a red-head girl grabbing things frantically and then the camera shifts over to a dead body. While the girl is frantically packing, the police bang on the door and shout, "Emma! Open up! We know you're in there!!"

The girl starts to run and then when the police break in they just catch Emma's bag swinging but can't catch her as she is running down the fire escape. When, NYPD realizes they can't catch her, one of them uses his walkie-talkie to describe Emma to the cops downstairs so they can catch her. When the cop on a cycle identifies Emma he starts chasing her on the street, and as Emma is running a cop comes out of the side she running towards and she runs into the nearest place - a dental clinic.

When the receptionist asks the mysterious lady who has her back to her asks, "May I help you?" Emma turns around and points a gun at the patients, doctors and the receptionist.

The next scene you seen Beckett and Castle are in bed as she asks him what she's going to do with her life now that she's been fired from the Justice Department job and there is a hiring freeze so she is unable to jump back to the NYPD.  As she and Castle discuss the situation and he tells her that she doesn't have to rush back into a job, Pi bursts into the room in a towel and asks to borrow a razor, then Martha breezes in handing both Castle and Beckett coffee and assuring them that "it's nothing she hasn't seen and done before".  Finally Alexis comes into the bedroom with the phone saying that Captain Gates is on the phone asking for Castle.

Apparently, once the standoff with the police is established Emma asks to speak only to Richard Castle. 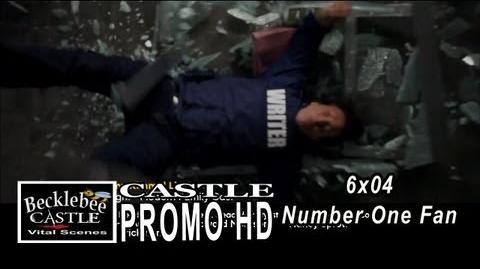 Lanie: Girl. what are you doing here?
Beckett: Uh, Captain Gates said that I could come.
Lanie: That's not what I meant. Shouldn't you be off looking at wedding venues or something?
Beckett: No, we haven't even set a date. We're just trying to enjoy our engagement. Why is everyone trying to rush us?
Ryan: Think you're in rush now, wait until after the wedding. Not ten minutes from the alter, they're all be like, 'When are you two having a baby?'
Esposito: Bro, your wife's hormonal because she's pregnant. What's your excuse?

Ryan: Hey, what does it say about your writing when your number-one fan tries to kill you?
Castle: That was an accident.
Esposito: Been one inch higher and it would've been a tragedy.
Castle: But on the bright side, your autographed copies of Deadly Heat would be worth way more.
Beckett: Not funny, Castle.
Castle: Little bit funny.
Esposito: You know, Beckett, despite your fiancee's near death, today was fun.
Ryan: Yeah. We miss working with you.
Beckett: Good. 'Cause I'm back.

Ryan: Hey, everybody, listen up! Beckett is back!
Castle: And tonight at The Old Haunt, drinks are on the house! Congratulations.

Castle: Looks like Mr. Stokes is going to be trading in his big house for the... big ...house.

Emma: I am not a murderer!
Castle: Says the lady pointing a gun at me.

Castle: Wow. And to think you boys mocked me when I had this made four years ago. I think I'll have it framed.