Once Upon a Crime

Once Upon a Crime is the seventeenth episode of the fourth season of Castle.

When a woman dressed as Red Riding Hood is found dead in the woods with claw marks covering her body, and soon after a murdered Snow White is discovered with a poisoned apple in her hand, Castle and Beckett find themselves on a Grimm hunt to catch a fairytale killer before he kills again.

"If you go down to the woods today" . . . Our story opens in an arboreal atmosphere, and flickering between the trees is a highly visible, instantly recognizable, figure - Little Red Riding Hood, in full garb. Tragically, our plucky heroine is about to be plucked, and her flight ends in a slash and a scream.

A tale of near equal horror, at least from Rick Castle's perspective, is unfolding in his own office - Martha is dictating her memoirs, with enough dramatic license to hunt down and render extinct any hope of realism. His "my life is being invaded" lament elicits no discernible sympathy from Beckett at the crime scene, and Ryan has the first of several tale-related bad moments in this episode, as the victim is the very embodiment of how he, as a child, pictured Little Red Riding Hood.

Castle's world is made a sunnier place when Beckett again demonstrates an unexpected facet they have in common - a profound knowledge of the Brothers Grimm "original" versions of these Central European tales, although her revelation does cause Esposito to display an unexpected romantic streak in his faith in goodness being rewarded, in a "happily ever after" manner.

The victim is found to be Amy Morgan, a lawyer, and her sister, Leslie, and brother-in-law, Darren Thomas, are brought in for identification. Amy apparently had no social life, working "like, a hundred hours a week" according to Darren, while only the fact they hadn't spoken all week seemed strange to Leslie.

Looking into animals loose in the park, the only reported case is canis canis, not canis lupus, and a beagle at that, so, dead end.

Lanie, as usual, sheds vital light on the matter, having established that the claw wounds were window dressing, and that a drug cocktail, directly injected, is the proximal cause of death. Beckett and Castle are, as usual, focused respectively on the who and why of this elaborate production, but beyond recent agitation Amy's life offers little in the way of clues.

A second victim, this time, and just as clearly, Snow White, has been found, again in Central Park. She is quickly ID'd as Kristina Curtis, an art gallery owner, and Castle's web search turns up the fact that she has been adorned with the exact words used in the Grimms' tale - although camera cuts earlier suggested that Beckett might, in fact, have already picked up on this, but left it unsaid so as not to tread on Rick's literary toes. Lanie concludes that she was killed by the same drugs as Amy.

Ryan and Esposito have to get a statement from Kristina's husband, Noah, who is clearly distraught, and unable to provide any real insight, apart from the fact that, like Amy, his wife had a mysterious "issue" at 1 pm the previous Friday.

With no apparent overlap in the lives of the victims, and since there would seem to be a ticking clock, because, as Castle correctly pointed out, for serial killer status their murderer would have to strike again, Esposito comes up with the bank record that shows a cash withdrawal by Kristina on the Friday in the amount of $50,605, an identical sum to the one taken out by Amy, and a solid connection.

Meanwhile, back on the homefront, Castle finds himself under siege and without allies as Alexis, promoted to stage manager by her Gram, is helping Martha enact her memoirs in the living room for "only 20 or 30 people". Castle attempts the Hemingway solution to this particular problem, introducing his sorrows to a large scotch, only to make it larger on hearing that Martha has invited Beckett to the performance.

Jamie Isaacson, living at 11th Street and 7th Avenue, is the name on the shipping manifest for the costumes worn by the victims, and since the order included a third, Sleeping Beauty, time is slipping away. Ryan, Esposito and armed backup race to the address and break down the door, although inside they, at first, find only a massive collection of dolls - disturbing Chuckie-alike, as far as Ryan is concerned. When Jamie Isaacson does emerge, preceded by a Zimmer frame, she is a septuagenarian, and clearly in no condition to chase anyone through Central Park. She is, however, highly hospitable to the officers, especially considering that they broke down her door, and informs them that the dolls and costumes are left for her in the lobby of her building. With no doorman, this means the real killer was able to have the costumes delivered there, charged to Mrs. Isaacson, and then pick them up at their convenience.

Ryan and Esposito interview the waitress who served the two victims lunch on Friday, and she remembers a third young woman being with them. Beckett and Castle, pursuing the financial thread, come up with a third withdrawal in cash Friday for between $50,000 and $60,000, by a young woman, and the waitress's description is a match. She's Charlotte Boyd, and locating her becomes a matter of urgency when she fails to answer her cell.

When Beckett and Castle arrive at her apartment the lock on the door has been smashed, and there's a young woman, in a Sleeping Beauty costume, lying on the bed. This princess, however, is still alive and is rushed to the hospital. Charlotte is a real estate broker, dealing with $10 million-plus properties, and she has a picture of herself and the other two victims, all in their respective costumes and with an unknown young man. The snag is that the picture was taken in 2005, and on the back is a blackmail demand, which would seem to explain the $50,605, especially since the date on the photo is 05/06/05.

Esposito turns up a police report from May 6, 2005, detailing the death of Owen Thomas, the young man in the photo, whose system was full of the same drug cocktail which killed the girls when he was hit by a car.

Charlotte recounts how she was working at home when someone broke in and drugged her, and Beckett brings her up to speed on the other two deaths. Charlotte talks about the night of May 6, 2005, how bad Owen's hallucinations were, and how the girls left him by the side of the road. When his death by hit-and-run hit the news, they were all terrified of the effect on their careers if they came forward as witnesses, so a pact was forged, and all three swore never to tell anyone what happened that night and would go their separate ways. The money went into a dumpster at Bleecker and Thompson, which, the team discovers, is conveniently, for the blackmailer, not covered by any security cameras.

There were, however, cameras in the shop where Darren got the blackmail photos developed, and since Owen was his little brother, and Amy his sister-in-law, he is suddenly the prime suspect. Beckett pulls him in for interrogation, and he eventually admits to blackmail, since he felt the girls should pay something for what they did, but not to murder. Darren claims he intended to set up a scholarship fund in Owen's name from the blackmail money. Beckett doesn't buy it, seeing as he had motive enough to murder. Darren then asks for a lawyer.

While Darren's marriage explodes when his wife confronts him with his blackmail and murder of her sister, Castle points out the incongruity of Darren mixing murder with "revenge at a distance" (blackmail) and feels that something doesn't add up. Beckett dismisses his concerns, perceiving Darren to be a psychopath who wanted to avoid murder charges. However, it's curtain up in five, so the discussion has to be shelved until after Martha's tour de force.

Castle is summoned backstage, and, after the requisite pleasantries, he finds himself promoted to the dresser as his mother prepares to got out on stage. Her bow is giving her problems, and so he is called on as an outside pair of hands, and this inability of Martha's to do for herself in this matter provokes an epiphany in her son, "We arrested the wrong man."

Back at the hospital, Beckett and Castle confront Charlotte with the wayward whore, the fact that her bow doesn't match the precision and alignment of the other two - because she had to tie it behind her own back. The duo voices their suspicion that it was Charlotte at the wheel of the car that killed Owen and reveals they found the receipt paying for the damages to Amy's car. Charlotte becomes evasive, saying they can't prove she was responsible. However, Beckett reveals that Charlotte's company handled Mrs. Isaacson's reverse mortgage, which was how Charlotte acquired her credit card details, with which she purchased the costumes. Charlotte is arrested, and Beckett and Castle head back to catch Martha's encore.

Martha declares that she forewent her opportunity to originate the role of the Wicked Witch on Broadway in order to take up an even greater role - mother. She laments, however, Richard's lack of equal commitment to the role of son.

Castle sums it up perfectly, "And into the woods we go." Beckett quietly laughs as she claps his hand with hers on his knee. 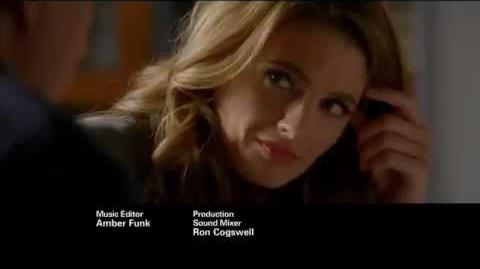 Beckett: Okay, at the corner of Bleeker and Thompson. There are no security cameras at the drop site, and so far, no witnesses.
Castle: He covered his bases.
Beckett: I know. It's really starting to piss me off.
Castle: Yeah, and you get cute when you get angry. But not when you get angry with me.

Castle: Murder does more damage to the living than to the dead.
Beckett: Yeah. All because of a terrible secret.
Castle: Secrets are like time bombs.
Beckett: Eventually they explode.

Castle: Really? You want to venture into the dark, scary woods?
Beckett: Don't worry, Castle. I've got a gun, I'll protect you from the big bad wolf.
Castle: You'd use your gun on my mother? I'm touched, thank you.

Esposito: Speaking of fairy tales, turns out that our victim really was Red Riding Hood.
Beckett: Are you drinking Castle's Kool-Aid now?

Beckett: Yeah, The wolf doesn't kill. The huntsman cuts her out and then she kills the wolf.
Castle: Someone's a brothers grimm fan.
Beckett: Oh, yeah. They didn't sugarcoat it. They understood that fairy tales are pretty much horror stories