Overkill is the twenty-third episode of the second season of Castle.

Beckett asks Demming to help her and Castle investigate a robbery-homicide, prompting the two men to fall into competition with each other to impress Beckett by proving their own theory in the death correct. As the case develops, it becomes obvious to Castle that, despite his efforts at solving the case, Beckett's relationship with Demming has gotten serious. 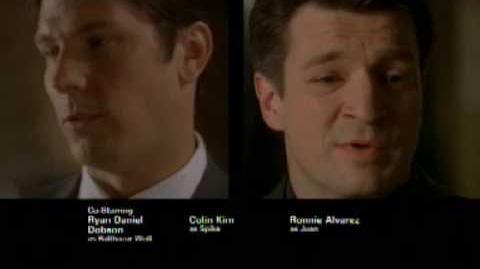 Lanie Parish: It's like Sex and the City...only with boys.

Beckett: I cannot believe you asked for samples.
Castle: What they said anything we want plus these aren't for me they are for Ryan and Esposito.
Beckett: Don't you mean Charlotte and Miranda.
Castle: Wait that would make me Carrie.
Beckett: You are so metrosexual for even knowing that.
Castle: Hey only watched that show out of the corner of my eye when my mom had it on.... that didn't make my point quite like I wanted it to.

Ryan: Beckett's a good cop; she can canvass and make goo goo eyes at the same time