Poof! You're Dead is the twelfth episode of the third season of Castle.

Richard Castle and Kate Beckett investigate the murder of the owner of a historic magic shop found dead in a Houdini's water torture tank. Meanwhile, Lanie and Esposito struggle to keep their relationship secret and Castle ends his relationship with Gina.

A woman opens a magic shop and starts setting up and opening a curtain, only to see a dead man in the torture tank and scream.

In an apartment, a couple lay naked on the floor together, when someones phone rings. Lanie gets up to pick it up, saying she has to leave as soon as she hangs up. Another phone rings this time it's Esposito's. He answers only to find out he has to leave too. They kiss, Esposito gets up, and Lanie tells him not to look, smile, or wink at her at the crime scene.

Esposito takes a photo of naked Lanie, agrees, and left the room, leaving Lanie, looking at his naked toned body, and sighing and falling to the floor, flustered.

Castle, walking to the crime scene, was on the phone with Gina, his ex-wife/girlfriend/publisher, and arguing. Esposito shows up as he hung up, asking how he was. Castle stated to him never sleep with a co-worker. Esposito, stunned, asked what did he mean. Castle told him that it doesn't end well.

Beckett noticed Castle look upset asked him what's wrong, but he told her that she's fine and change the topic to the crime scene: Drake's magic shop. Castle mentioned that he been here since he was thirteen and it was a paradise for boys. Beckett told him that the magic shop isn't just for boys because her grandfather was a magician and she came here when she was thirteen. Castle ask her if she know any tricks and Beckett said that she does, with ice cubes and heads inside, leaving Castle flabbergasted. 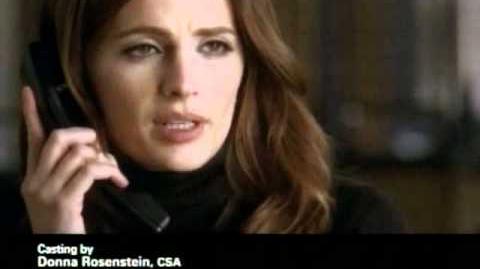 Lanie: Javier Esposito, when we get to this crime scene, do not wink at me, do not smile and do not even look at me with those puppy dog eyes. Got it?

Castle: I never pegged you for a magic fan. You know any good tricks?
Beckett: I do this one thing. With ice cubes.

Castle: Hey, X-ray specs. Got ‘em at the magic shop. I can see you naked.
Beckett: Really? How do you like my navel ring?

Beckett: Zalman Drake was murdered last night.
Jerome Aspinall: Justice is served.
Castle: When he read your mind, did it take . . him . . very long?
Jerome Aspinall: No, it didn't, no.
Castle: No, didn't think so.

Beckett: So... where's Esposito?
Ryan: Huh. Take a wild guess.
Castle and Beckett: Lanie?
Ryan: Can you believe they still think that none of us know?
Castle: Oh, let's let 'em keep thinking that a while longer. The bubble bursts soon enough.
Beckett: Not if you're in it with the right person.