Rise is the first episode and season premiere of the fourth season of Castle.

As Beckett fights for her life, Castle attempts to find the person responsible for the shooting. Meanwhile back at the precinct, Ryan and Esposito try to adapt to the new captain in charge. When Castle asks her at the hospital, Beckett says that she doesn't remember anything about the time of the gunshot. Castle is shocked, but Beckett later admits to a psychiatrist that she remembers everything, and that she lied to Castle.

The episode begins with Beckett being rushed into surgery at the hospital. During the operation Josh blames Castle, saying that he is the one responsible for all this as he was the one who pushed Beckett to look into her mother's case. Castle believes that Josh has a point, and takes it hard.

Once Beckett is stabilized, Castle learns that she doesn't remember anything about the assassination attempt. Beckett tells him that she needs time to heal, and that she'll call when she's ready to talk. For three months Beckett recovers, however she never called Castle.

In the precinct, Esposito and Ryan deal with the new captain, Victoria Gates, who kicked Castle out of the precinct. Beckett finally approaches Castle at a book signing for Heat Rises. He is angry at first, but settles down when Beckett apologizes and tells him that she broke up with Josh.

Meanwhile, they all begin investigating the most recent murder case, of Soniya Gilbert, who was shot in her apartment. At first they think that her boyfriend Dale is the murderer, and when they track down Dale he pulls a gun on Beckett, who freezes up upon seeing the gun. No one else sees her freeze, but Castle noticed that her hand was trembling. The team finds evidence that Dale is not the killer, instead the real killer had been hiding in the room so that he could frame Dale. They return to the apartment and upon inspecting the area underneath the bed, Castle discovers that while the underside of the mattress is soaked with blood, the floor underneath has a large, body-sized dry spot, as well as discovering the fingerprints of Dale's bandmate Mitch. During the raid on the band's headquarters, Mitch threatens Beckett with a shotgun. She freezes up again, but Castle supports her and helps her overcome the fear. As Beckett shakes her fear, she persuades Mitch to surrender and arrests him.

While back at his apartment, Castle is contacted by a friend of Montgomery's, who appeared earlier in the episode inspecting the files that Montgomery had sent him before he faced Lockwood. He contacts the US Capital after reading the files and then contacts Castle. Castle discovers that in order to guarantee Beckett's safety, Montgomery had made a deal with the man behind the murders. In exchange for not releasing files that could hurt him, he wouldn't kill Beckett. It is revealed that after Montgomery's death, the deal no longer applied, since he had assumed that the files had died with Montgomery, and so led to the assassination attempt on Beckett. However, Castle is told that the deal was back since the files were back in the picture. Castle talks to Martha about it and decides that in order to keep Beckett safe, he would try to keep her away from her mother's's case.

Later after closing the murder case, Beckett and Castle talk, and Castle tells Beckett to give up on her mother's's case for the moment, and that they would eventually catch the man who ordered the hit.

As it turns out, Beckett has a secret to hide. She goes back to the police shrink and tell him that she lied about what happened at the shooting. She remembers everything, including Castle confessing his love to her. How long will she be able to keep this secret, and why did she lie to Castle? 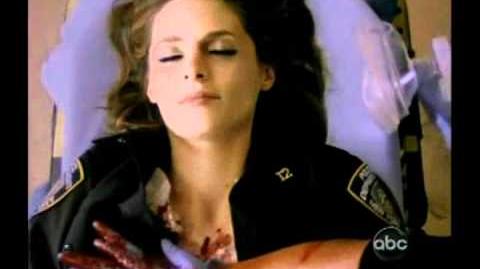 Jim Beckett (refer to Josh and Castle arguing): I won’t have you acting like three year olds while my daughter is fighting for her life.

Beckett: I lied. Before.
Dr. Carver Burke: What do you remember?.
Beckett: I remember everything.

Castle: This is my fault.
Martha: Richard Castle, don't you dare blame yourself. You are not the one who shot her.
Castle: No. But I put her in the crosshairs.