The Blue Butterfly is the fourteenth episode of the fourth season of Castle, filmed partly in the style of film noir flashbacks.

Castle gets a hold of a diary that was written in the 1940s, and tries to solve a modern day crime through the information in it. Every time he reads it he flashes back to the '40s, with the principal cast playing characters in the diary. 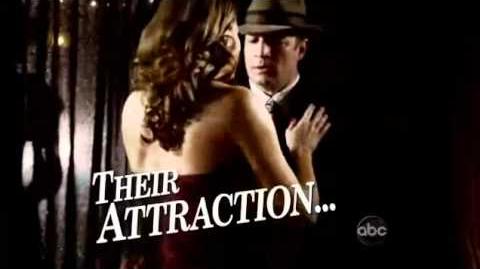 Esposito: Do you know of anyone who's been threatening Stan lately?
Manager: I'm the manager here, not the den mother.
Ryan: Okay then. When was the last time you saw him?
Manager: Uh, this morning. Stan was all smiles. Gave notice that he was moving out ‘cause his ship was coming in.
Ryan: What ship?
Manager: Oh, I don't know. The Titanic, from the looks of things.
Esposito: Well, if you remember anything else, can you please give me a call?
Manager: Don't hold your breath, hotshot.
Ryan: I think she likes you.

Vera: Are you hurt?
Joe: What, this? It's nothing. You should see what my face did to the other guy's fist.
Vera: So what's your name, tough guy?
Joe: Does it matter doll?

Castle: The Blue Butterfly! It's a necklace. That's why Stan Banks was killed. Why am I narrating?

Castle: It happened backstage, right upstairs. They were stealing a moment together which was dangerous because she was Dempsey’s girl. As they stared into each other’s eyes, Kate’s heart quickened...
Beckett: Did you just say "Kate"? Are you picturing the PI as you and me as a gangster’s moll?
Castle: What?! No! And I didn't say "Kate", I said "fate". Fate’s heart quickened. I was being poetic. God. Anyway, as I was saying, they were just about to kiss when...

Betsy: You better wise up, Vera. Dempsey will have you butchered if he finds out. I mean, he's a hell of a smoocher and all but, damn it, girl, is this yum-yum really worth it?
Vera: He's the cream in my coffee.
Betsy: You two are a walking fairy tale, good Lord.