The Good, The Bad & The Baby

The Good, The Bad & The Baby[1] is the tenth episode of the sixth season of Castle.

This episode is the mid-season finale and the last new episode to air in 2013.

A bleeding man stumbles into a church, but just before dying, he hands a mysterious bundle to the priest. When the bundle turns out to be a smiling baby boy, Castle and Beckett find themselves accidental nannies to the newborn. But when they determine the baby and the victim were not related, they discover that finding his rightful parents may be just as hard as solving the murder. 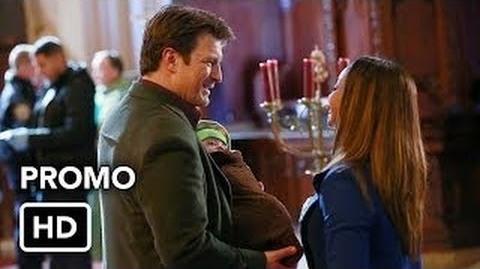 Beckett: You guys dress up for Thanksgiving?
Castle: Doesn’t everybody?
Beckett: No, I think that’s pretty special to you. Um, so is there anything else I should know about you before we get married?
Castle: So many, many things.

Castle: I have an RHD in child care.
Beckett: And an RHD is?
Castle: Ruggedly Handsome Dad.

Ryan: Our baby's due in a month, and I can't stop it. What if I'm really not ready?
Esposito: Well, you're not ready.
Ryan: What?
Esposito: Nobody is. Look, being a dad is like being a cop. Doesn't matter what they teach you in the academy, you learn on the streets. You did okay with that, right?
Ryan: Uh... my first day I was so nervous, I rear-ended a SWAT van and ten guys in vests poured out ready to take me out with extreme prejudice.
Esposito: Well... you care. That already makes you a hundred times better than the dad I had.

Castle: Do not laugh.
Beckett: I'm not laughing
Castle: You do not laugh. Get me the towel.

Alexis: How long have I been gone?

Martha: Katherine, what on earth are you wearing?
Beckett: My... outfit. Your family... tradition?
Castle: You do know I was kidding about that, right?
Beckett: You know, I actually wasn’t sure about that. So I figured if this isn’t a Castle family tradition, then maybe it should be. Better put this on, pilgrim.

Ryan: Whoa. You two look like you have been hit by a truck

Beckett: When the time is right... there's no way I'm letting you taking care of our baby.