The Limey is the twentieth episode of the fourth season of Castle.

A devilishly handsome detective from Scotland Yard, Colin Hunt, teams up with Castle & Beckett to find the person responsible for the murder of his friend's daughter.

Also, Charles Shaughnessy plays Nigel Wyndham, the Deputy General at the British Consulate who Castle and Beckett's suspect is up to more than just ambassadorial balls and diplomatic luncheons. Meanwhile, Lanie convinces Beckett that she needs to make a move on Castle before it is too late. 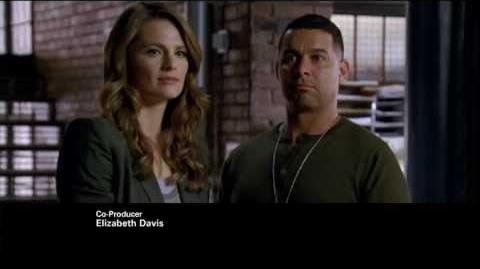 Beckett: I’m telling you something happened, something changed. It’s been weird between us lately.
Lanie: Lately? Kate, it’s been weird for four years.
Beckett: No, this is different. He’s different. It’s like he’s pulling away.
Lanie: Well, can you blame him? He’s probably tired of waiting.
Beckett: Waiting for what?
Lanie: What do you think? The guy is crazy about you. And despite your little act, you’re crazy about him. Oh, what? Was that supposed to be some big secret?
Beckett: Yes! No. Do you think he knows?
Lanie: You remember how he used to be, girl on either arm? You really don’t see that guy too much anymore. Why do you think that is? He’s waiting for you!

Beckett: Told you I'd see you again.