The Lives of Others

The Lives of Others [1] is the nineteenth episode of the fifth season of Castle and its 100th episode.

In the show's 100th episode, Castle finds himself in the unfortunate position of NOT being able to work a case. While he's holed up in the loft with a broken knee cap, Beckett goes off to investigate the death of an IRS agent without him, leaving Castle miserable and bored. But when he thinks he witnesses the murder of a young woman in the apartment across the street, he is thrown into a "Rear Window"-esque murder mystery that hits much too close to home. 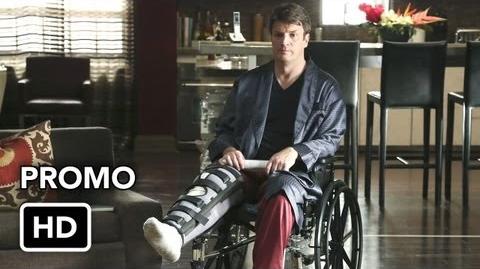 Ryan: Then you are missing out.
Esposito: What? Let me see.
Ryan: No, hey!
Esposito: Give me those!
Ryan: Dude, she was just about to take off her towel.
Esposito: Oh, the towel is off.
Ryan: Really?
Esposito: Yeah. Mmm.
Beckett: Unless the body that you're looking at is dead, I suggest you drop those binoculars.

Castle: How many murders do you think we’ve solved since we met?
Beckett: I don’t know, uh, maybe a hundred or so?
Castle: A hundred?
Beckett: Mm-hmm.
Castle: Here’s to a hundred more.

"The Lives of Others" (Das Leben der Anderen), a German film about the monitoring by agents of the former East Germany's secret police, won the 2006 Academy Award for Best Foreign Language Film.