Time Will Tell[1] is the fifth episode of the sixth season of Castle.

A grisly murder investigation leads Castle and Beckett to a suspect (Joshua Gomez, “Chuck,” guest stars as Simon Doyle) who claims he's traveled back in time to stop terrible events from unfolding, events that will change the course of human history. Is he simply a deluded killer, or is it possible that he's telling the truth? 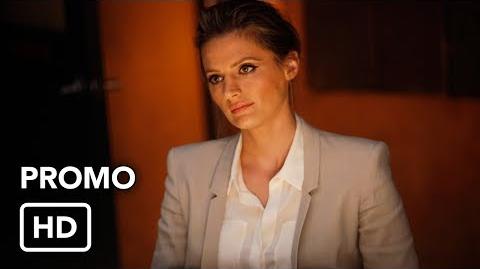 Castle: In what universe does that make sense? I’ll tell you what universe. The one where she’s blinded by emotion and not thinking straight. It’s like watching a car accident in slow motion.
Beckett: You know, Castle, my Dad wanted to kill the first guy that I moved in with. He did everything he could to try and talk me out of it and all that did was make me wanna do it even more.
Castle: I wish her future self could come back and talk to her present self and let her know what a mistake she’s making.

Castle: Then why torture her? What could the killer want?
Ryan: What, Castle, no crazy theories?
Beckett: Oh, he's got bigger issues. His daughter's moving in with a boy.
Ryan: And you're letting her?
Castle: Well, apparently the only way to stop her is locking her up, but according to Miss By-the-Book here, that's unlawful imprisonment.

Simon Doyle: A real charmer, that one. I can't believe you marry her.
Castle: How did you know I marry her?
Doyle: One of your book jackets. You know, "Richard Castle lives in New York with his wife, Senator Beckett, and their three children."
Castle: Senator?
Beckett: Three kids?

Castle: I write serious literature? Beckett, you hear that?
Beckett: Yeah I heard. And I'm the president of fantasy land.

Beckett: You're trying to drive me crazy, aren't you?
Castle: Well, apparently, I already do if we end up with three kids.
Doyle: Would you like to know their names?
Castle: Yes.
Beckett: No!