Valkyrie[1] is the first episode and the season premiere of the sixth season of Castle.

Last season ended with Beckett wrestling over whether to take a high-profile job in DC -- a dilemma made more complicated when Castle proposed to her. In the Season 6 Premiere of “Castle,” Castle and Beckett will deal with the consequences of their decisions against the backdrop of a high-stakes investigation.

Lisa Edelstein ("House") guest stars in a three-episode arc as a tough and highly-skilled Federal investigator whose appearance plays a vital role in Beckett's decision about her future. 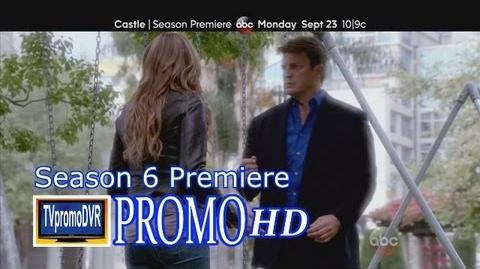 Castle: Kate, I'm not proposing to you to keep you here or because I'm afraid I'm gonna lose you. I'm proposing because I can't imagine my life without you.
Beckett: Well, in that case, Richard Edgar Alexander Rodgers Castle, yes. Yes. I will marry you.

Esposito: If your hero’s fictional cop buddies are anything like your real cop buddies, then they’d have real work to get back to. So, bye bye now.
Castle: What if our hero was offering Knicks floor seats?

Beckett: : Oh my God! Oh my God. You’re proposing.
Castle: Okay. You’re surprised.
Beckett: Of course I’m surprised. I thought you were breaking up with me.
Castle: By offering you a ring?
Beckett: Well, you just-– you seemed so serious.
Castle: Of course I'm serious. This is the most serious thing I've ever done.
Beckett: Good.

Beckett: No, Babe, can--can you listen for a second?

Castle: Was I...? How bad?
Beckett: Based on the amount found in your bloodstream, you have less than a day to live.

Retrieved from "https://castle.fandom.com/wiki/Valkyrie?oldid=43033"
Community content is available under CC-BY-SA unless otherwise noted.